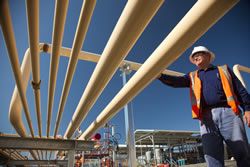 SANTOS’S environmental impact statement for its $8 billion liquefied natural gas project is tipped to be given the green light by the Bligh Government as early as next week, putting it in pole position in Queensland’s dash for gas.

Last week there was speculation in the market that the Queensland Government was not happy with the oil and gas giant’s 13,500-page EIS and that sign-off could face significant delays.

However, sources within the Government have told the Herald that the ongoing dialogue between it and the company had been “constructive” and that approval could be given in the first week of June.

The news is a blow to the three other big players – Origin/ConocoPhillips, BG and Shell – which all have rival LNG projects due to come online in 2014.

The Santos/Petronas project, proposed for Curtis Island, off Gladstone, is the only one of the four which has completed an EIS. Earlier this month BG, which plans to build its LNG plant next door to Santos on Curtis Island, became the first of the big players to sign an offtake agreement for its gas. China National Offshore Oil Corporation will take 3.6 million tonnes of the product over a 20-year period in a deal estimated to be worth as much as $US45 million ($58 million).

Santos has said it is “very, very close” to announcing its own customer to take its LNG. It has tapped the market to raise $3 billion to fund its 17.7 per cent share of Exxon Mobil’s $US16.5 billion Papua New Guinean LNG project, which is on track to be approved this year.