THE Ray White Gladstone office is celebrating 40 years in the business after being opened by brothers Bruce and Edgar Allen on May 27, 1980. Taken over by Bruce Allen’s son Andrew Allen and co-Director John Fieldus in 2008, much like the Ray White Group, the business has stayed in the family since it’s beginning.

Andrew Allen said it brings himself and Mr Fieldus immense pride to be leading a business established 40 years ago and the first Ray White business outside of the White family. “The business has reached an amazing milestone, the outlook for the Gladstone property market into the future is very bright and we look forward to continuing the tradition of supporting the Gladstone community,” Mr Andrew Allen said.

Mr Fieldus has been a part of the Ray White Gladstone team for 32 years and echoed these sentiments saying it’s never lost on them how important the office is. “We’re custodians of the first Ray White franchise outside the White family,” Mr Fieldus said. “I think the thing that I admire looking back is the family aspect of not only the Ray White Group but also the Allen family that started the business. “It’s still in the Allen family but the way they have embraced me over the last 32yrs, they’ve always made me feel awfully welcome. It’s somewhere that has a genuine family feel throughout the business and Andrew and I take that seriously in the family we have raised here. “I love this place, it’s given so much to me. I’m indebted to it and I can’t imagine my life without it.” 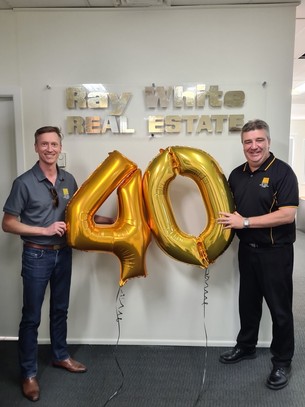 Andrew Allen and John Fieldus with the original Ray White reception sign from 1980.

Ray White Queensland CEO Tony Warland said the Gladstone office is a successful, enduring, well led business and congratulated them on reaching 40 years “This is a story that we love to tell,” Mr Warland said. “The office has remained in the family for 40 years and Ray White Gladstone has now surpassed 1040 properties under management. “This is extraordinary considering Gladstone is a close community of around 35,000 people. “We congratulate the whole team on this achievement, and note that they have never had a lower vacancy rate at around 0.5%.

“Having renewed our agreement to pursue ambition together eight times over the past 40 years, the relationship between Ray White and our Gladstone business is one that has been close and enduring. “Congratulations and all the best for the next decade and beyond.” In a video sent to the Ray White Gladstone team, Brain White congratulated the two directors saying he salutes them on the office’s anniversary.

“What an experience to be here, congratulating Gladstone on their 40th anniversary being in Ray White,” Mr White said. “It brings back such personal memories, I was there in Gladstone with Edgar Allen coming to an agreement for the very first franchise in the Ray White network. “Thank you so much for being part of our family.”

Back to all news
Up to Date